Click on the expand and collapse icons to see more or fewer details throughout the page.

FCMAT assigns default assumptions to resource-object combinations based on industry standard. Assumptions that have been default applied can be modified or deleted to customize a projection to local needs.

To request a new assumption be applied by default to a resource-object combination or range, please request additional assistance through the FCMAT help desk. Include:

This screen has six sections to help organize the assumptions.

F. Assumption Explanations and Other Adjustments 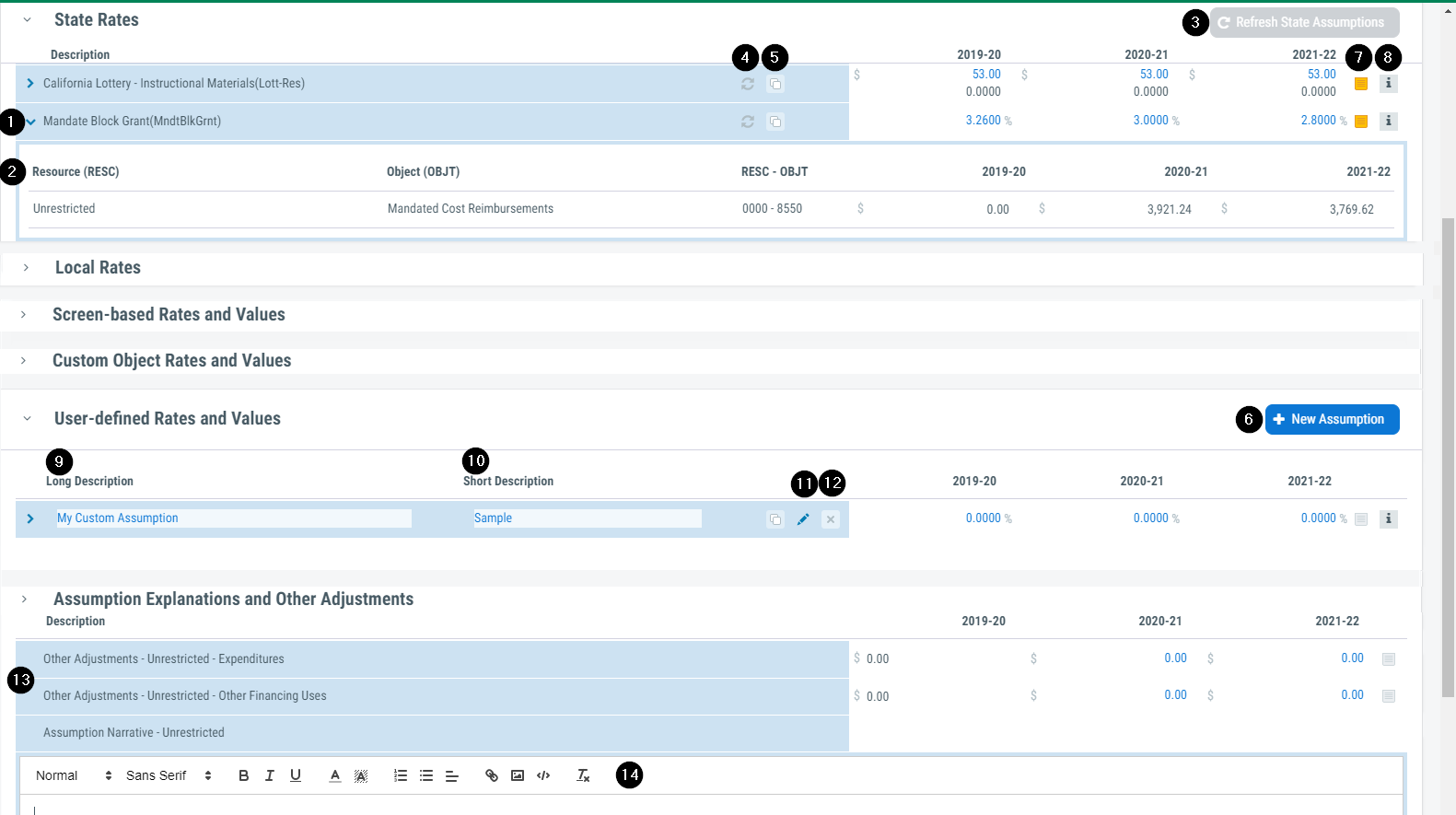 This row displays general information for the assumption, including the long description, short description and rates.

The copy icon creates a copy of the selected assumption in the 'User-Defined Rates and Values' section. The copy retains all of the underlying assumption settings from the original assumption, but they can be modified.

This feature can be used to create a local assumption with a unique title to separately track the effects of the assumption.

The 'New Assumption' button creates a new assumption based on default assumption settings. Once created, the settings can be modified to create a custom assumption.

Assumption notes can be read and edited from this section of the screen. The notes button indicates whether a note exists or not. By default, the system prefills notes with the system source and any helpful tips for applying the assumption. These notes can be overridden to meet local needs.

Clicking the 'Information Icon' will display the assumption settings for the selected assumption.

The long description field is the title of the assumption as it will appear in drop-downs, when applied to a resource-object combination, and in reports.

Clicking the pencil icon on an assumption displayed in the 'User-Defined Rates and Values section will display a window where the assumption settings can be modified for the selected assumption.

The 'Entry Format' setting defines the formatting of the assumption rates.

The 'Type' setting defines whether a single set or customizable set of assumption rates is applied across the projection.

The 'Timing' setting defines whether the adjustment from the assumption is one-time or ongoing in nature.

The 'Special Calculations' setting defines whether the enterable rates or values apply per the standard calculation methodology or whether special handling occurs.

The 'Personnel Type' setting defines which salary adjustment description the activity of the assumption is reported on in the multiyear projection reports.

Click the 'x' icon to delete a custom assumption. This will remove the assumption from all locations where it is applied in the projection.

To use this field, enter the adjustment value on the appropriate line. Then, in the narrative area, include an explanation for any significant expenditure adjustments.

Consult your fiscal oversight agency for additional requirements before using the Other Adjustments fields.

There are three narrative fields in the Assumptions Explanations and Other Adjustments section: unrestricted, restricted and combined. These fields display in the multiyear projection reports, each narrative field displayed and printed on a separate page.

For the unrestricted and restricted narrative fields, at a minimum explain any significant expenditure adjustments in the 'Other Adjustments' fields and projected staffing changes. Use these fields to also communicate major assumptions that don't display on the assumptions page of the multiyear reports and any other highlighting information that local stakeholders would find of interest.

Use the combined narrative field to highlight hot topics and future plans that have been included in the multiyear projection. Discuss the LEA's ability to meet the minimum reserve requirement. Try to communicate in a way that links the dollars back to the actions to make the narrative more meaningful to your stakeholders. For example, instead of emphasizing the funding adjustment:

The LEA added $5,000 of funding in Sample restricted program and estimates an additional $5,000 to be spent on workbooks.

rewrite the activity to emphasize the purchase and impact to make it more accessible to stakeholders:

In 2021-22, the LEA plans to provide science workbooks to 100 at-risk elementary students at a cost of $50 each with new funding from Sample restricted program.

You can also use the multiyear export data to create custom graphs and charts from your multiyear projection results.