This optional-use screen is designed to automate the calculation of indirect costs within the general operating fund. To use this screen, navigate to it and select 'Yes' to confirm application of the Indirect Costs assumption.

For LEAs that have the resource and/or object setting set to 'NonSACS' in the 'LEA Data' 'Settings' tab, a custom object code must be referenced to 7310 Transfers of Indirect Costs SACS object code in the 'Chart of Accounts' for the 'Indirect Costs' screen to function.

What are Indirect Costs

These costs are charged annually to each program resource within the general fund using SACS object 7310, Transfers of Indirect Costs.

Funding applications or award letters should be consulted to determine whether programs limit or prohibit the claiming of indirect costs. Common limitations include:

Because indirect costs are a transfer from restricted to unrestricted sources, miscalculations impact an LEA's reserve and may play a role in an LEA's fiscal distress.

FCMAT creates and maintains system defaults based on publicly available information from the California Department of Education (CDE).

Approved indirect cost rates for LEAs are posted online annually on CDE's Indirect Cost Rates web page, usually in early spring. These rates are imported into the system as defaults when they become available.

The default program resource rates established in the software are based on information available in the CDE's PCAs and Associated Resources spreadsheet.

The rates can be modified within an individual projection to create alternative scenarios.

A.  LEA Rate
B.  Unrestricted Resource
C.  Other Resources 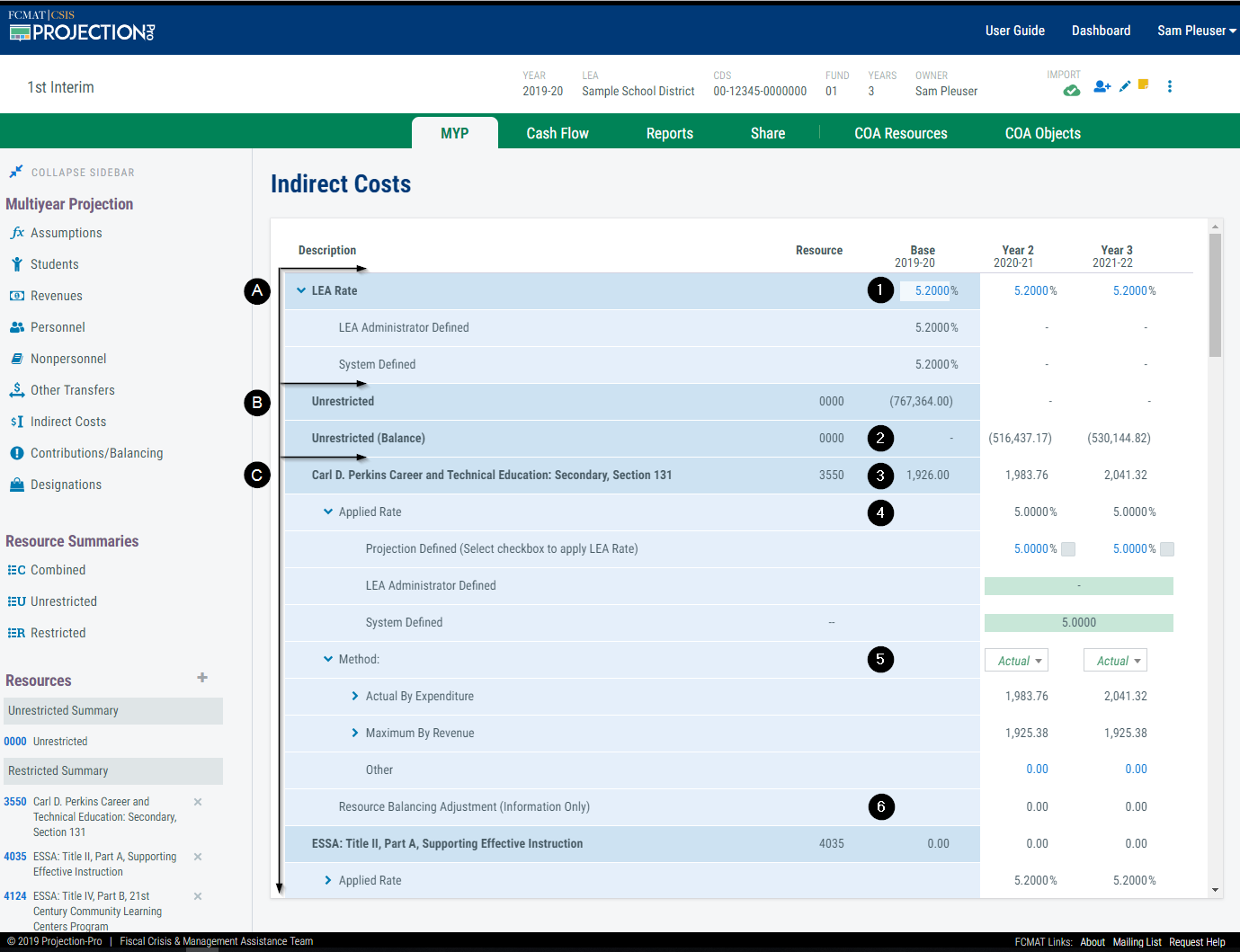 The first step to calculating indirect costs is determining the applied LEA rate. Expand the LEA Rate row to display the current default LEA rates from the system and LEA Data.

Once a projection is created, the 'LEA Rate' is held constant unless manually updated. This permits the projection to be retained as a snapshot in time even if the LEA or system defined rates are updated in the future.

The 'Unrestricted (Balance)' row displays the projection for the unrestricted resource, code 0000. It is calculated by summing the indirect costs, object 7310, for all other resources and offsetting it to balance to $0 within the fund. These values are applied in the multiyear projection as the 'Indirect Costs' assumption.

The first row for each resource contains the resource title, code and projected indirect cost value. Below are two expandable rows, 'Applied Rate' and 'Method,' and one informational row, 'Resource Balancing Adjustment.'

The base year value is imported as part of the base year or can be manually updated on the Resources screen.

The projected years are calculated per the method selected:

The results are rounded to the nearest penny.

Once a projection is created, the 'Projection Defined' rate is static unless manually updated. This permits the projection to be retained as a snapshot in time even if the LEA or system defined rates are updated in the future.

The resource 'Projection Defined' rate can be set to either a percentage or 'LEA Rate':

See What are Indirect Costs for more information on limitations.

LEAs have the option to charge less than the approved rate when recovering indirect costs. However, indirect costs not claimed under one award may not be shifted to another award unless specifically authorized by legislation or regulation.

A third method is offered in the software, 'Other,' for use when neither of the above automated methods calculates the desired result due to special program restrictions or local processes or policies.

The method is set by year for resource by selecting the option from the drop-down box.

This method multiplies the total direct costs of the award (SACS objects 1000-5999), less any excluded costs (SACS objects 5100-5199), by the restricted indirect cost rate. Custom object codes are included in the calculation based on the SACS reference.

This method automatically recalculates as changes are made in the multiyear projection.

This method divides the award amount (SACS objects 8010-8799) by 1.xx, where xx equals the decimal equivalent of the 'Applied Rate,' then subtracts the result from the original award amount. Custom object codes are included in the calculation based on the SACS reference.

This method automatically recalculates as changes are made in the multiyear projection.

When neither of the above automated methods calculates the desired result due to special program restrictions, local processes or local policies, manually calculate the desired indirect cost and enter it on the 'Other' line.

Because this method is based on a determination or calculation outside of the software, this method does not automatically recalculate as changes are made in the multiyear projection.

The 'Resource Balancing Adjustment' displays the offset to indirect costs due to expenditure adjustments made on the 'Contributions/Balancing' screen to balance a resource.

This line is displayed as a separate assumption in the multiyear projection screen to better track and display the total value of balancing adjustments made to a resource.