A multiyear projection is a mathematical model that takes an assumed status quo, the base year, and projects future years by making modifications for locally known assumptions.

Each year is calculated based on the result of the prior year:

Assumptions displayed in the Base Year column are for informational purposes only.

No assumptions are applied to the object, so the projected years are at status quo, or $110 for Year 2 and Year 3.

Example 2 builds on example 1 by adding two assumptions to the object. The first assumption is a reduction of $25 for a one-time purchase that occurred in the base year and won't be repeated in Year 2 or Year 3. The second assumption is for the California consumer price index (CPI). The CPI adjustment is 4.0000% in year 2 and 3.5000% in year 3. The ending values for the object in Year 2 and Year 3, respectively, are $88.40 and $91.49.

Note: To apply a percentage assumption, first calculate then apply the equivalent dollar value based on the provided percentage.

Example 3 reverses the order of the two assumptions from example 2. The ending values for the object in Year 2 and Year 3, respectively, are $89.40 and $92.53. The increased difference is that the CPI percentage is applied to a balance that includes the one-time purchase of $25.

Example 4 - One-time in a Projected Year

In Year 2, an LEA plans to purchase three classroom sets, 90 devices, at $1,000/ea. These are the last sets to be purchased per the Technology Plan.

Example 5 - One-time Activity in the Base Year

What if the LEA in example 4 advanced their plans and made the purchase in the base year? Assume the base year Budget has been updated for the $90,000.00 purchase.

The ongoing adjustment assumption becomes part of status quo. It is not reversed after step 3.

An assumption with the 'Proportional' setting first calculates the change within the resource between two fiscal years for the object range specified in the assumption, and then applies the result to project a related budget value. 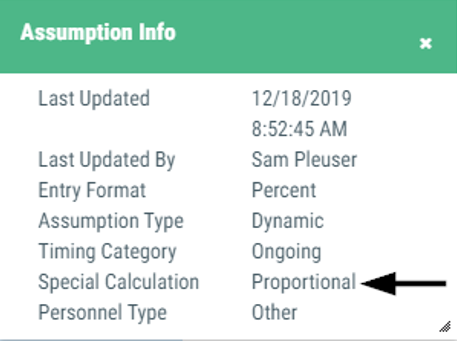 To project the related increased cost for PERS retirement, the Proportional Relationship assumption is applied to the PERS retirement object based on the rate of change calculated from the classified salaries object range, objects 2000-2999.

Step I - Determine the rate of change for the identified object range.

Step II - Apply the rate of change to the object being projected.

An assumption with the 'RateChange' setting first calculates the change between two percentage or dollar values entered within the assumption, and then applies the result. 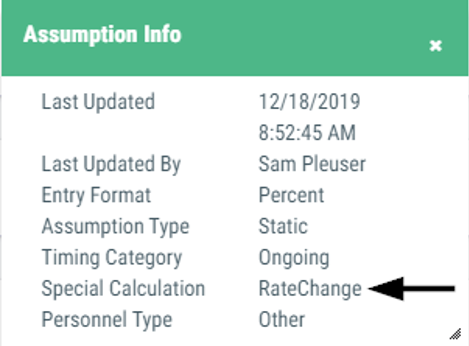 Continuing with the PERS benefit projection scenario in example 6, the PERS rate is projected to increase per the following schedule:

Note that the following two calculations yield the same results. Applying the rate change assumption like the second calculation allows us more flexibility to adjust our projection with proportional or students assumptions when appropriate.

Step I - Determine the rate of change between the rates specified in the assumption.

Step II - Apply the rate of change to the object being projected.

An assumption with the 'Manual' setting applies the value entered in to the assumption as the final projected result without any calculation. 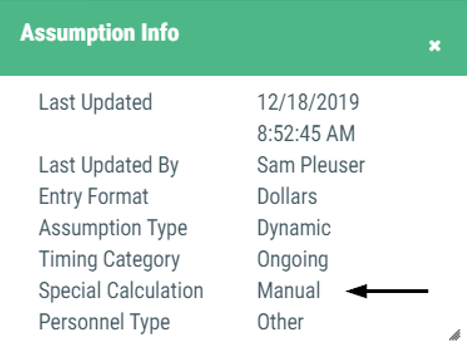 The LEA has an approved equipment replacement plan, including the budgeted costs allocated for a replacement schedule.

As assumption with the 'Zero' setting applies the projected value of $0 to all future years. 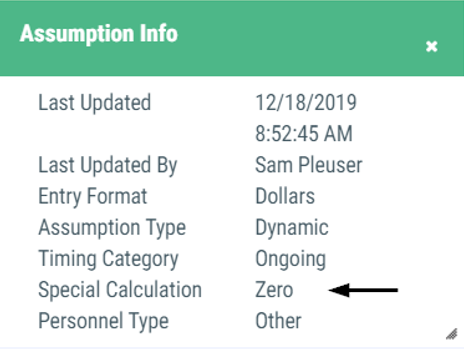 Altering the scenario in example 8, the LEA is discontinuing its equipment replacement plan after the current year.